SK E&S participates in the world’s largest CSS project to be carried out in the U.S.

“We Capture Carbon Ourselves in the World”
SK E&S participates in the world’s largest CSS project to be carried out in the U.S.

- The company invests in the world’s largest CCS project that will capture and store up to 12 million tons of carbon dioxide a year
- SK E&S builds a CCS dream team with U.S. companies that are the leaders in their industries such as Summit Agricultural Group and Continental among others
- “The company seeks to contribute actively to carbon reduction by using ESG-based low-carbon business models such as CCS and energy solutions

On May 10, SK E&S announced that it will invest in a North American carbon capture and storage (CCS) project with leading U.S. energy companies.

The project is the world’s largest CCS project to capture and store up to 12 million tons of CO2 a year that are produced by 32 corn ethanol plants in 5 Midwest states in the U.S. CO2 captured at each plant will be transported to an underground carbon storage facility to be built in North Dakota for permanent storage through a pipeline of 3,200 km. 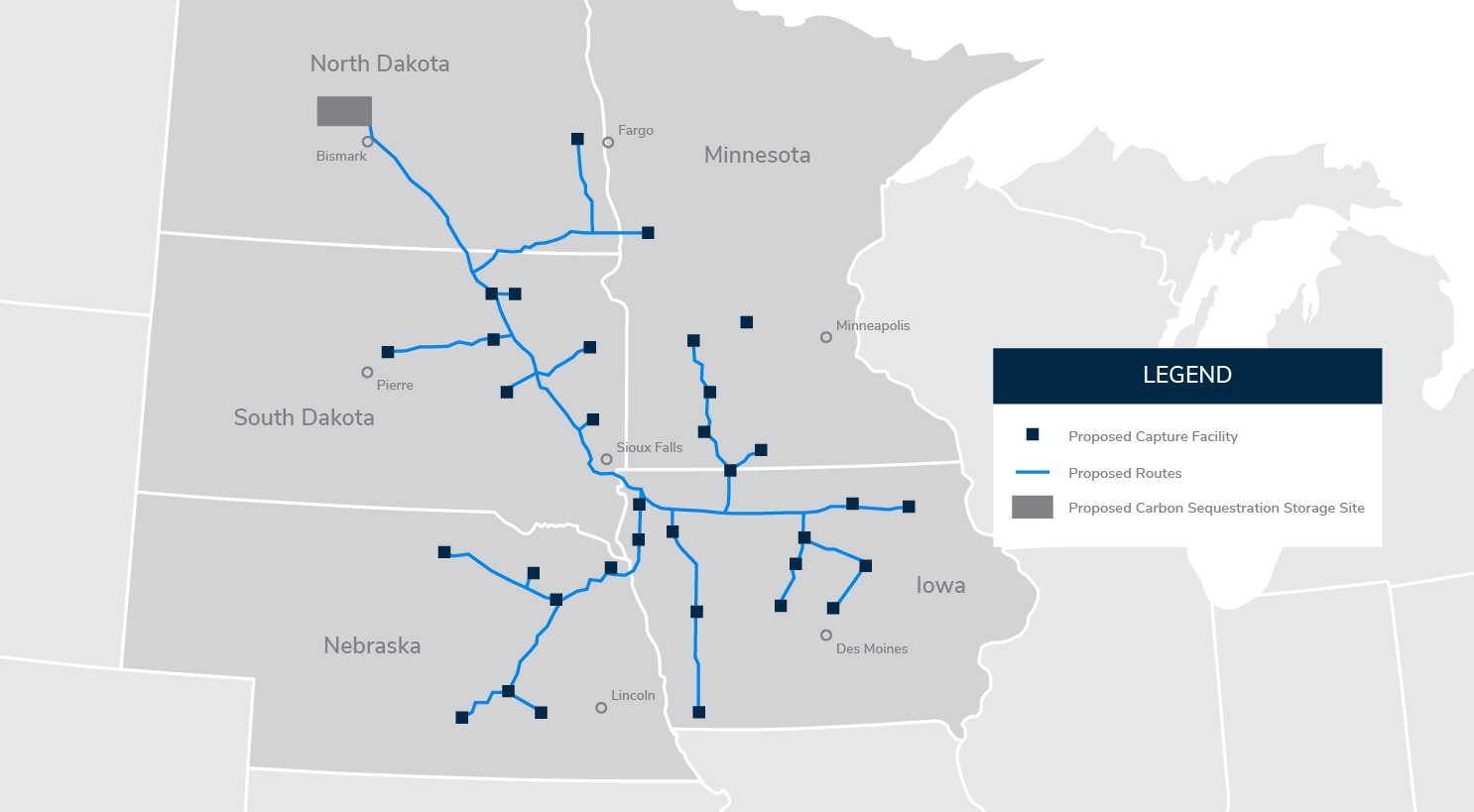 To reduce fossil fuel use, the U.S. has implemented the Renewable Fuel Standard (RFS) program since 2015 under which the ethanol volume required for blending into gasoline should be at least 10%. The steady demand for ethanol has made the U.S. the world’s largest bioethanol producer and consumer. Bioethanol, usually made by fermentation of corn or sugarcane, can be used for many areas such as motor fuel or an industrial raw material, but it has a disadvantage of generating CO2 in the production process.

SK E&S plans on spending $110 million to acquire 10% stakes of Summit Carbon Solutions that is leading this project. The CCS project timeline indicates the construction of the CO2 storage facility and the pipeline will begin in the first half of next year and the commercial operation target date will be the second half of 2024. The Midwest U.S. the pipeline will pass through is densely populated with not only bioethanol plants but large CO2 emitters such as ammonia production plants, which forecasts a steady increase in the demand for CCS in the future.

SK E&S said it will join hands with Summit Agricultural Group (Summit), the North American diverse farming and agricultural investor, Continental Resource, one of the largest U.S. petroleum and gas companies, and Texas Pacific Group (TPG), the global private equity firm. By doing so, the company is building a “CCS dream team” to dominate the carbon reduction market in the U.S.

SK E&S also shared its plan to create strategic synergy effects with Summit by using the American company’s experience in biofuel business in the U.S. and Latin America as well as with Continental which possesses know-hows about various pipeline operations in petroleum and gas business in order to create the best CCS infrastructure. Especially, SK E&S and Continental have maintained strong partnership since 2014 when they started joint development of shale gas fields in Woodford.
Having declared its aim to “achieve carbon neutrality by 2050”, the U.S. is providing various incentives for the CCS technology industry which offers a key tool for carbon reduction. Bioethanol produced through CCS process can generate a carbon credit depending on the amount of CO2 reduced accordingly. CCS operators can receive up to $50 of tax credits per ton of CO2 captured. This favorable policy support is expected to raise the amount of CO2 processed through CCS annually from 29 million in 2022 to 71 million tons by 2030, increasing by about 12% a year on average.

By participating in the world’s largest CCS project, SK E&S seeks to establish a bridgehead in large global CCS projects planned in countries including the U.S., and in general, contribute to achieving carbon neutrality goals by generating carbon credits. By far, the largest global CCS project has been Shute Creek in the U.S. whose annual capacity is approximately 7 million tons.

Earlier, SK E&S unveiled its plan to use CCS technology in its Barossa gas project in Australia to capture and remove carbon dioxide produced in the process of natural gas production. The South Korean energy company plans to offset all of its carbon emission in the project by capturing all of the carbon dioxide produced in exploration process and storing it in nearly closed gas fields as well as by generating carbon credits for remaining CO2 produced in processes. The company also plans to apply CCS technology to hydrogen production processes in the future in order to produce clean hydrogen from which CO2 is removed from 2025 at its hydrogen plant to be built in Boryeong, Chungnam Province, Korea.

SK E&S expects its ongoing CCS projects in Australia and the U.S. will contribute greatly to achieving the SK Group-wide carbon reduction goals. Earlier, SK Group suggested a specific target of cutting 200 million tons of CO2 by 2030 which amounts to 1% of the global target (21 billion tons). Especially, CCS projects using closed gas fields and saline aquifers are expected to have growing capacity, playing a role of outposts in SK Group’s commitment to carbon neutrality.

“CCS is a critical technology that can directly reduce carbon dioxide produced in the process of using different energy sources such as natural gas and bio fuels,” Yu Jeong-joon, Vice President of SK E&S, said. He added, “SK E&S will strive to contribute substantially to reducing about 100 million tons of greenhouse gas which is 5% of the U.S. government’s target by 2030 by actively engaging in low-carbon energy projects in the U.S. including CCS ones.”